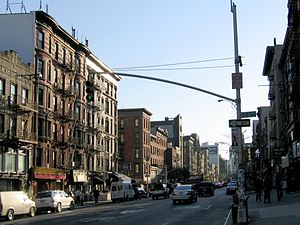 The East Village is a neighborhood in the borough of Manhattan in New York City, lying east of Greenwich Village, south of Gramercyand Stuyvesant Town, and north of the Lower East Side.


The area was once generally considered to be part of the Lower East Side, but began to develop its own identity and culture in the late 1960s, when many artists, musicians, students and hippies began to move into the area, attracted by cheap rents and the base ofBeatniks who had lived there since the 1950s. The neighborhood has become a center of the counterculture in New York, and is known as the birthplace and historical home of many artistic movements, including punk rock and the Nuyorican literary movement. It has also been the site of protests and riots.


The East Village is still known for its diverse community, vibrant nightlife and artistic sensibility, although in recent decades it has been argued that gentrification has changed the character of the neighborhood.